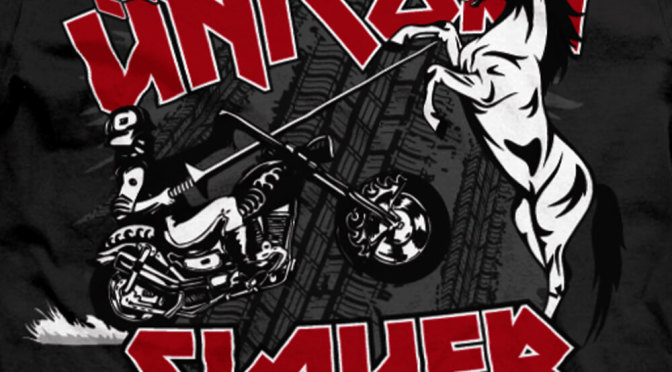 First a little back story.

When designing for the public you often find yourself designing for peculiar customers. These customers have extravagant design ideas that sometimes make you sit up in your chair, scratch your head, and go “WTF?” One day an employee gave an art job to me and jokingly said that the customer wanted a unicorn riding a dolphin swimming through a rainbow. This quickly became the new code for “we have a crazy design for you.” After awhile it was shortened down to a sweet simple “we have another unicorn.” One of the artists in our office often knocks out the unicorn jobs and we decided to give him the title of “The Unicorn Slayer” and since his birthday is coming up, we decided it would be fitting to design him a shirt with this in mind.

How I arrived at the final design.

Being as the aforementioned “Unicorn Slayer” is somewhat of a typical biker, my initial idea was to design a rugged and tough unicorn riding a souped-up Harley. This didn’t seem to capture the idea of “The Unicorn Slayer” though, so I scratched that idea and decided to design a biker/knight fighting a unicorn. Upon scouring the internet for some knight armor I could pull inspiration from, I stumbled across jousting and the design idea immediately began manifesting.

This site uses Akismet to reduce spam. Learn how your comment data is processed.